E3 is a collaboration between A Rocha Aotearoa NZ, Scripture Union NZ, and Adventure Specialties Trust to run leadership development expeditions among senior college students during the summer holidays. The 11-day journeys are run through Otago lakes; north Canterbury/Clarence River; and the central North Island/Whanganui River; and the collaboration is enabled through the generous support of the Longview Trust.

Selwyn Yeoman, A Rocha’s local group leader in Dunedin helped lead E3 Otago in December 2020 starting on the Main Divide of Kā Tiritiri-o-te moana / the Southern Alps at the head of the Makarora valley, on Tīoripātea /
Haast Pass. The twelve students and three leaders tramped through parts of Mount Aspiring National on the Young/Wilkin Gillespie Pass crossing – walking through dense forest, crossing glacial-fed rivers and traversing alpine passes; kayaked (and got blown by north-westerlies) on the vast expanse of Lake Wanaka; and mountain-biked the isolated Minaret Station out to Glendhu Bay before finishing their expedition in Wanaka.

Over in Canterbury on the other side of the Main Divide of Kā Tiritiri-o-te-moana / the Southern Alps, the E3 Canterbury expedition started on Lewis Pass (864m). The first five days involved tramping through sections of the Lewis Pass Scenic Reserve and St James Conservation Area in the Canterbury region. The route passed through pastoral land, beech forest and sub-alpine regions before heading over Fowlers Pass (1296m) – the highest point of the journey. Putting aside their tramping packs, the group spent a day biking 40km on Tophouse Road, alongside the upper section of the Clarence River. The cycling leg ended at the historic Acheron Homestead. Transferring to rafts, they spent their final five days rafting down the beautiful and isolated Clarence River/ Waiau Toa, before reaching their final destination – the East Coast!

Meanwhile, in the North Island, A Rocha supporter Sam Macaulay helped with the first ever E3 North Island – beginning almost in the middle of Te Ika-a-Māui / North Island, high on the slopes of Tongariro, Ngāuruhoe, and Ruapehu. The North Island E3ers traversed on foot up these peaks and down their slopes to meet their bikes outside National Park. From here they winded their way through the hill country on single track and gravel road to the Wanganui River. Next they paddled through some of the remotest parts of the Wanganui River, passing by the communities of Jerusalem and Pipiriki. After saying goodbye to their canoes they completed their journey to the ocean on their bikes – a mountains to sea journey! 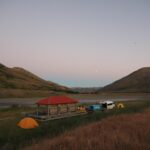 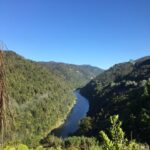 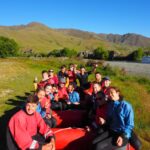 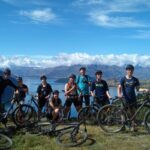 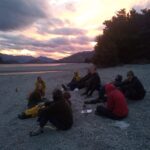 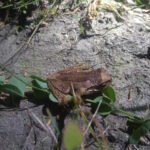 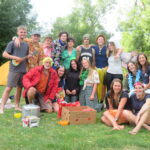 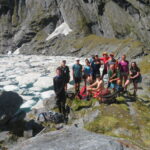 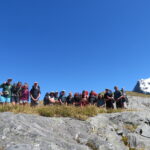 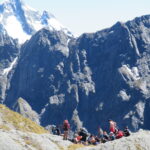 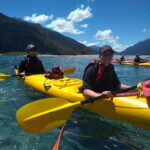 What the journey meant for the faith development of each participant will be for them to discern in coming months, but all spoke of discovering the value of a disciplined daily life, being humbled and inspired by the beauty and grandeur of creation, and becoming more deeply aware of their connections with the Earth. All admitted to a much greater awareness of water (especially those from Auckland!), and, through stream studies of invertebrates, a greater awareness of human impacts upon the environment. We also gained new insights into the challenges of farming and food production. All discovered that their bodies were capable of meeting greater demands than they had imagined, and that happens best in the supportive fellowship of others.