Electric cars, secret codes and the slightly slower destruction of the world

We’ve featured a number of stories over the years reflecting on sustainable transport (often featuring A Rocha leader Steve Muir). Below is a light-hearted reflection by Steve on this important theme which we hope will amuse and inspire.

In the years past, when acting as a frequent chauffeur for my children, I would light-heartedly ask: “Do you want to bike or shall we destroy the world?” (i.e. take the car). I’m not sure what long term psychological trauma this query has inflicted on my children, but they would often reply: “I’d like to destroy the world today, thanks.” I feel I can no longer use this penetrating question as I have now invested in a fully electric Nissan Leaf, which emits no carbon dioxide and charges on almost 100% renewable electricity. The Leaf is the most enjoyable driving experience I’ve ever had – quiet, instant and amazing acceleration, cheap running costs, and best of all, no climate change guilt. 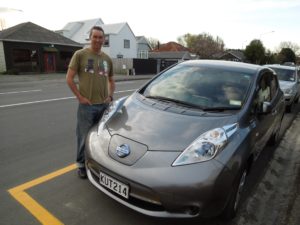 Steven with his 2014 Generation 2 Nissan Leaf

However, I have an uneasy little niggle still: is there a dark side to going electric? That’s when I turned to investigating secret codes to reveal the mysterious reality going on. For those of you who may be a little sceptical about the existence of secret codes (like I used to be), let me give some background. Some believe that the Bible is full of encoded messages. For example, you might take the 7th letter of the 7th word in the 7th chapter in a book in the Hebrew Torah, and it might spell out a profound message. In a recent example, Rabbi Matityahu Glazerson discovered a message in the book of Numbers that predicted Donald Trump’s victory in the US elections![i] God can, of course, hide spiritual wisdom in all manner of places. “Electric car”, for example, is an anagram for “cleric react”. I take this as a sign that purchasing such cars may cause clerics – and indeed the whole church – to engage more fully with caring for creation. “Nissan Leaf” though, disturbingly, is an anagram for “an false sin”. This perhaps highlights the fact that although electric vehicles may solve one of the major problems of petrol cars – CO2 emissions – they do not solve several other major problems.

So, by enthusiastically using my electric car, am I just destroying the world a little more slowly than with my petrol car? Troubled by this question, I turned to the little known art of finding secret codes in car number plates. The Bible has examples of using a randomising process to determine God’s will – such as the drawing of lots to determine the replacement apostle for Judas (Acts 1:26). As Proverbs 16:33 says: “the lot is cast into the lap, but its every decision is from the LORD.” So, perhaps God may use the random code selection of my number plate to speak secret messages to those who have ears to hear?

My Nissan Leaf came with the randomly allocated plate KUT214. I took this to be a good sign. KUT obviously stands for the Nissan Leaf’s ability to ‘kut’ down on global warming emissions and 214 is clearly the level of carbon in the atmosphere (parts per million) at the start of the Holocene, before humans began polluting, and the target we should aim to ‘kut’ back to. Clearly, my electric car is part of the solution, not the problem.

Sadly my wife did not appreciate the inspirational value of this number plate. A clinical psychologist, she works often with self-harming children. As the intended principal driver of the Leaf, she thought the letters ‘KUT’ would be traumatising for her clients as they walked past the car to her office. Wishing to encourage her to make the most use of the car as possible, I reluctantly agreed to pay the $19.95 fee for a replacement randomly allocated number plate. Part of me was eagerly looking forward to the additional secret messages that might be revealed in the replacement plate and whether it would clarify whether indeed electric cars will aid the health of the planet or just continue to destroy the planet at a slightly slower rate. The result? Maybe you could help me interpret the secret message…. 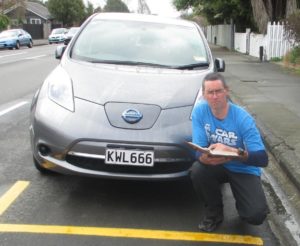 Any guesses what KWL 666 might be secret code for? Send your answers to: [email protected]