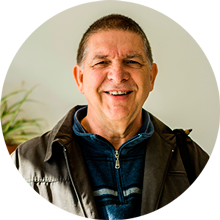 His research interests include the book of Revelation (on which he has taught courses for Auckland University, Otago University and Laidlaw College), Relevance Theory, translation theory and biblical hermeneutics, especially ecological hermeneutics.  Stephen has presented papers on the biblical interpretation and the care of the earth at the 2005  “Creation Care” conference in Auckland which led to the establishment of A Rocha Aotearoa NZ, at the first A Rocha conference in Raglan in 2008, at the A Rocha National Conference in Wellington in 2012 and at the Ecology and Hope conference in Auckland in 2016. He is currently editing a special issue of The Bible Translator as a result of a joint session with the Ecological Hermeneutics section of SBL, 2018.

He has been a member of the ARANZ Auckland local group committee since its beginnings in 2008 and is involved with a local stream restoration project in Unsworth Heights.

Stephen is an elder at Northcross Community Church.  He is married to Raewyn (co-chair of Auckland ARANZ committee) and they have four adult children and six grandchildren.